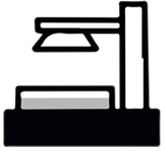 What Does DLP 3D Printer
Mean and Where Does It Come From?

Digital Light Processing (DLP)
DLP stands for digital light processing, and is a type of vat polymerization. Vat polymerization 3D printing technologies make use of a (liquid) photopolymer resin which is able to cure (solidify) under a light source.
In the world of vat polymerization, there are two main technologies: SLA and DLP. Naturally, both use resin and a light source to produce parts, the main difference being the type of light source which is used to cure the resin.
In order to understand DLP properly, it first makes sense to describe its predecessor, SLA. 3D printers that employ SLA, or stereolithography, use a build platform, an elevator that moves the platform upwards, a tank filled with resin, a light source and galvanometers.
SLA 3D printers start to work by lowering the build platform into the resin-filled tank with only one layer of height left between the bottom of the tank and the build platform. Then the galvanometers take over.
Galvanometers are mirror-like components used for navigating the laser beam of an SLA printer to the bottom of the tank. With the help of G-code, galvanometers navigate the laser beam in a path which represents one layer of a certain part. The laser then cures the resin making a solid layer of a part. When one layer is complete, the build platform moves up by one layer in height and the process is repeated until the part is complete.
Switch To Desktop Version